This year and beyond, it's time to resist this militarized agenda and promote a moral budget that rises to the urgent crises of our time.

President Trump released his fourth budget proposal this week, and its priorities are as clear as ever.

Apparently last year’s bipartisan $738 billion Pentagon budget deal wasn’t enough. Across the board, the 2021 budget request prioritizes brute force and militarization over diplomatic and humanitarian solutions to pressing societal crises. Just about every non-militarized department funded by the discretionary budget is on the chopping block, including all those that focus on reducing poverty and meeting human needs like education, housing, labor, health, energy, and transportation.

Meanwhile, the greatest proposed cut to a federal department in dollar amounts, $11.7 billion, is to the State Department—yet another signal that the Trump administration prefers to starve international diplomacy and foreclose the possibility of peace-building in favor of prolonging the forever wars in Iraq and Afghanistan (fully funded at $69 billion), and escalating global military tensions by boosting foreign military aid by $2 billion. 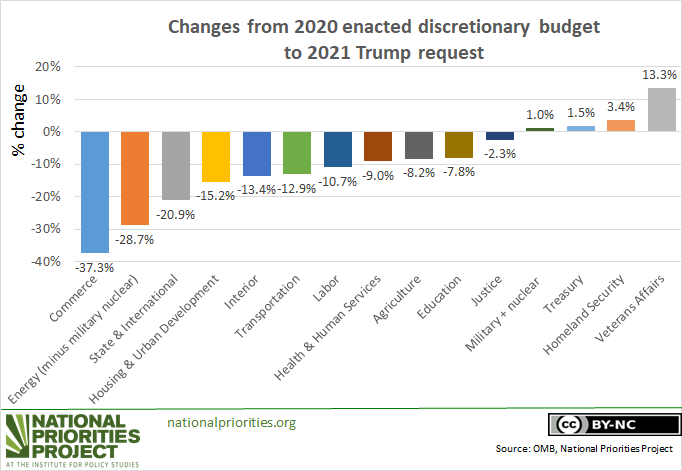 One of the greatest proposed cuts as a percentage of this year’s spending, 28.7%, is to the Department of Energy, which already devotes a tiny amount to transitioning the country’s energy supply to renewable sources as quickly as necessary. And as this country’s affordable housing crisis keeps growing, the Trump budget proposes a 15.2% cut to the Department of Housing and Urban Development (HUD).

Trump’s 2021 budget advances exactly the wrong priorities for a society to deal proactively with the crises of accelerating economic inequality and climate disruption. Congress rarely passes an initial budget proposal as is, but last year’s “compromise” military budget increase shows how an initial request from the President can end up shaping a bipartisan consensus if left unchallenged.

This year and beyond, it’s time to resist this militarized agenda and promote a moral budget that rises to the urgent crises of our time.