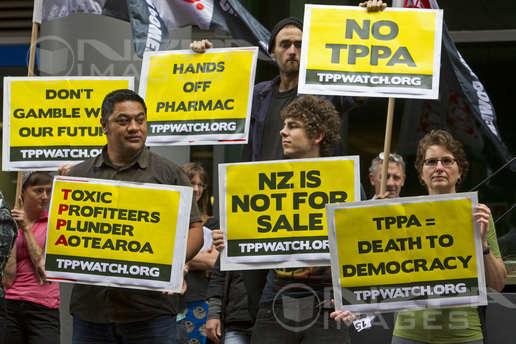 Vacuuming Up the Pacific’s Resources

If NAFTA is any indication, the TPPA will open up the islands of the South Pacific to tremendous exploitation. 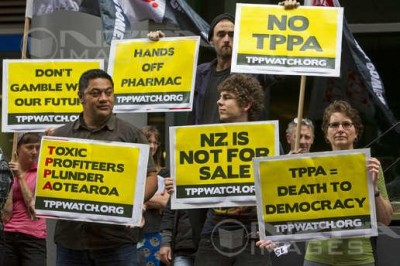 Obama describes the TPPA as a “a trade agreement for the 21st century” that improves on and rectifies past problems in U.S. trade and investment treaties. Nine countries are currently negotiating the TPPA: the United States, Australia, New Zealand, Chile, Peru, Brunei, Vietnam, Malaysia, and Singapore. Japan is in preliminary talks, and Canada and Mexico are looking to join. Although the negotiations are being held in secret, leaked documents confirm that the TPPA is a “NAFTA on steroids.” Contrary to democratic practice, the documents connected to the negotiations will remain secret for four years after being signed or dismissed.

The United States is leading the negotiations and has a great deal of influence over the outcome of the agreement, which covers a vast range of subject matters, including tariffs on goods, trade in services, labor and the environment, telecommunications, and intellectual property. For Pacific Islands, however, the investor rights chapters may offer the greatest challenge to Pacific Island environmental resources.

Throughout Oceania, native peoples separated by thousands of miles share similar cultural and often linguistic bonds. Long before contact with the west, Pacific peoples not only were connected by the currents of their ocean homes but had established trans-pacific navigational routes, trade, and for the most part a sustainable relationship with their environmental resources.

For most Pacific Island countries (PICs), trade has been a series of disadvantageous agreements with larger economies that negotiate access to island resources. The PICs have remained economically tethered to larger economies despite attempts at small-island integration by sub-regional institutions like the Pacific Island Forum (PIF) or the more progressive Melanesian Spearhead Group (MSG). Just last year, a new sub-regional group called the Polynesian Leader’s Group challenged the MSG, which had made waves by advocating participation in an alternative economic system. By joining with a bloc like the BRICS (Brazil, Russia, India, China, South Africa), Pacific Islands might do better than the neoliberal programs advocated by PIF.

In comparison with other emerging economies, Pacific Islands have poor performance records. Much of the blame rests on the neo-liberalism of regional institutions like the ADB and APEC. Since the late 1990s, an increase in aid-based relationships has not only stunted the development of many island peoples but also provided a dumping ground for overstock and consumer detritus. Although private investment has had some success in developing traditional farm and fishery practices, these projects are dependent on funding from the Asian Development Bank (ADB), the EU, the World Bank, and U.S. and Australian aid organizations.

In a 2006, the ADB examined small island states among the developing member economies, suggesting that isolated and vulnerable economies remain under economic stress as a result of their governments’ inability to guarantee the basic security of their people. In 2008, as a response to its self-funded study, the ADB worked with international partners to deliver infrastructure services in the Pacific to streamline private-sector investment to industrial sectors like energy, water, waste, security, and telecommunications, as well as mining, cash crops, and fisheries. The Pacific Region Infrastructure Facility (PRIF) is one such organization.

Privatization is the latest vehicle for the exploitation of island resources. But these international investment projects, along with the bilateral investment treaties that support them, have yet to provide any long-term sustainable cultural or environmental benefit to small island economies.

Impact of the TPPA

Embroiled in a decades-long struggle for independence from Chile, Rapa Nui (Easter Island) is a Pacific Island at risk of being crushed under the weight of the TPPA that Chile signed in 2005. Since joining the TPPA, Rapa Nui has been fighting a tidal wave of development proposals for mining projects, airfields, ports, casinos, and hotels. These projects, which would irreparably change a UN World Heritage site, primarily benefit the Chilean government and the investment regime. For example, through the transnational Transoceanica Holdings, international investors funded the development of the Hotel Hanga Roa on land belonging to the Hitorangi clan. In 2010, as the Hanga Roa prepared to open, members of the clan occupied the hotel. Rapa Nui erupted in violence when Chilean President Sebastián Piñera sent navy cruisers and hundreds of armed security forces to end the unarmed protests.

In recent discussions around the TPPA, little attention has focused on how a regional “Asia-Pacific” free-trade agreement will actually impact Pacific Islands. But some recent examples of investments in the region are quite revealing. In Papua New Guinea, Canada’s Nautilus Minerals has launched a new deep seabed-mining project called Solwara 1. Large deposits of gold, silver, nickel, copper, manganese, and other rare-earth minerals are buried deep in the seabed, and the method for extracting these minerals – basically vacuuming up the seabed onto a barge – has only recently been developed. Little is known about the deep seabed, and no conclusive environmental study has been completed. But the life that thrives in this unusual environment is sulfur-based rather than oxygen-based. When the sludge is extracted onto a barge, it is then separated from the commodity metals and minerals and then dumped back into the ocean. The impact of this sulfuric sediment absorbed by fish or reefs is unknown. However, sulfuric changes in the environment negatively affect oxygen-based plants and animals, as people living with vog (volcanic smog) know all too well.

After the International Seabed Authority changed the regulations for deep seabed mineral extraction, Nautilus acquired even more international investment to lease large tracts of deep seabed in Fiji, Tonga, the Solomon Islands, and New Zealand. These changes have prompted other Canadian, U.S., and Australian mining companies to lease seabed areas in the Exclusive Economic Zones of many other Pacific Island Countries. This mining deregulation, which has resulted from agreements like the TPPA, will likely push ocean biodiversity closer to what the International Programme on the State of the Ocean describes as “irreversible, catastrophic change.”

Consider also the case of Endeavor Mining, which recently offered the Cook Islands government a partnership proposal worth $1 billion over three-and-a-half years for mineral and mining rights to the seabed resources. Typically, since Endeavor is also an independent merchant bank focusing on the global natural resources sector, it will likely offer investors a package of financial incentive benefits that will reward investors at the expense of a state whose 2009 GDP was just short of $200 million.

If made responsible for cleanup in the event of accidents, island governments and taxpayers could be liable for any financial losses. As a result, Cook Islanders might find themselves in an ecological catastrophe and mired in debt. Additionally, to qualify for loans to pay back this debt, multilateral lending institutions may well insist on austerity measures that would lead to further deregulation. Locked into a variety of competing investor agreements, the Pacific islands will find themselves in a race to the bottom, both economically and environmentally.

If the investor-rights “chapter 11” provisions in NAFTA provide any clues about how the TPPA will privilege international investor agreements over government regulations, the Pacific Islands will be opened up to tremendous resource exploitation. Environmental regulations are all that protect the fragile biodiversity of the region. And the costs associated with the despoliation will largely fall on the shoulders of Pacific islanders themselves. The corporations will reap the profits; the Pacific Islands will have to pay the long-term bill.

Looking Beyond the TPP

The average GDP of the smaller developing Pacific islands is around $350 million, with the exception of Fiji, whose annual GDP is around $3.5 billion, and Papua New Guinea at around $9.5 billion (for perspective, New Zealand’s GDP is around $125 billion). There is a tremendous gap between the combined GDP of the islands and the value of the resources exploited from these countries.

This gap represents a strategic imperative for Pacific island economies to integrate along the lines of sustainable trade and sensible environmental regulations. The TPPA is certainly not an equitable integration scheme. Rather, this NAFTA of the Pacific is like tossing a shark in a fish tank. The TPPA will give even less room for PICs to negotiate positive environmental regulations or manage to accrue social or economic benefits from their natural resources.

Pacific Islanders need to be part of the negotiating process to ensure they are at least able to integrate their commodity resources, since they are critically unequipped to develop their economies to scale with the larger economies. They also need to create a regional regulatory agency that can independently manage the various trade and investment agreements. Without democratic input and democratic control, the TPPA will vacuum up all the resources of the Pacific and leave a poisoned ocean in its wake.