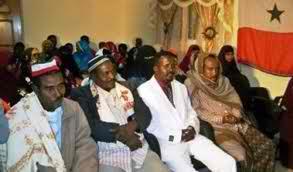 Meeting of the Gabooye clan in Somalia

The State of Somali Union

If Somalia is to become a politically stable, economically viable, and peaceful nation that can compete with other African countries, clan-dominated federal states must be made a thing of the past.

Meeting of the Gabooye clan in Somalia

In any federal system, the gray area between the powers of the federal government and those of the constituent states is a constant battleground. What is remarkable about the U.S. federal system, for example, is that even though power is relatively decentralized — each of the 50 states has its own constitution — the center still holds supreme. Allegiance to the union dwarfs all other loyalties to state or local identities.

In comparison, Somalia’s recent experiment with federalism seems to have further fragmented the country and incited the creation of competing clan-based entities that may ultimately dampen the effectiveness, if not the foundation, of the central government.

Since the fall of the unitary state in 1991 and the subsequent two decades of lawlessness, local Somali communities have been gradually drifting away from one another into more exclusive clans protected by regional authorities. With the absence of a functioning national government to restore public confidence and provide basic governmental services, most Somalis below the age of 30 today generally identify with regional and clan-based entities that are antithetical to the existence of a central government.

As a consequence, Somalis are more inclined to rejoice in the achievements of their local groups than to take note of their collective national tragedy. This exclusive group pride seems to metastasize as international community actors and western scholars overemphasize bottom-up approaches to peace building — as if the ongoing conflict over power at the national level does not trickle down to local entities when power and resources shift to the local level. Around two-dozen regional governments have been formed and more are on the way, jostling each other and challenging the legitimacy of the national government.

The political boundaries of these newly formed entities are often undefined and contested, sometimes partially or completely overlapping with the territories of already existing states. National authorities have provided little guidance on the number, makeup, population, or boundaries of these states, as well as the process of establishing them. The draft constitution only stipulates that the union of two or more regions of the 18 subdivisions from the military regime in the 1980s is required to form a legitimate federal state.

What is uniquely alarming about these new federal states is the inherent desire of their governing entities to maintain clan hegemony, prestige, and domination over others, as well as the absence of grassroots consultation and the exclusion of women and local minorities. The Somali Supreme Court — which regrettably exists only in name — lacks both the capacity and the constitutional authority to adjudicate these complex federal matters.

This balkanization of Somalia into mini-states has the potential to spark new clan-based wars and prolong the Somali conflict. Additionally, fearful that a strong Somalia could stir up political mischief in their own fragile and ethnically complex societies, Somalia’s neighbors take every opportunity to promote the fragmentation of Somalia into weaker regions. A weaker Somali state with countless federal entities will undoubtedly make it easier for neighboring states and international businesses to secure favorable bilateral agreements for control of Somalia’s natural resources and long coastline.

In Search of a New Model

Somali politicians and intellectuals continue to debate whether the nation needs a unitary, decentralized unitary or a sensible federal system.

Federalism is seen in many corners of Somali society as the best option to suppress the dictatorial tendencies endemic to many unitary systems that concentrate power and resources and exercise total control over the social, economic, and political interests of society. On the other hand, supporters of the unitary system fear that a weakened central authority may render a functional Somali union impossible. Many see clan-based federalism as a zero-sum game in which power gained by the states creates powerful clan hegemonies that exact a hefty price from the honor and overall standing of the national government.

What complicates the matter for Somalia is that national identity and citizenship take a secondary role to clan identity when interests of individuals and groups in society are at stake. Moreover, clan-based regions do not guarantee legitimate ownership of land and property to non-member citizens living in the region, nor do they provide any legal basis for the effective participation of other clans in the political process. What ultimately cripples the clan-based system is that it fails to resolve or even address the clan rivalries that have proven so troublesome in the past; in fact, it simply recapitulates these rivalries at another level.

A decentralized unitary system of government that divides power among the national, regional, and local levels may be ideal to meet the demands of both the proponents and opponents of federalism. It would enable Somalia to rebuild a new government that is responsive and accountable to its citizens and yet strong enough to guarantee its survival in a volatile region, especially with neighboring Kenya and Ethiopia exploiting Somali divisions to pursue their own interests inside the country.

Toward a Sustainable Federalism

Ending the Somali conflict requires a system that promotes fairness, justice, and the equitable distribution of national resources. A clan-based federal system cannot deliver this desired outcome. It would only shift the reckless competition for power and resources away from the national government to the states, possibly sparking new conflict among them.

Social, political, and economic insecurity breed a reckless desire for domination that fuels endless rivalry and conflict. This is exactly what brought Somalia to its knees in the first place and what incapacitates it today. To overcome their present malaise, Somalis need to transcend this endless clan rivalry.

Communities in conflict cannot be expected to coalesce around a stable state government when they are deeply concerned about the potential misuse of state power by their rivals. Therefore, a genuine and authentic reconciliation among clan communities needs to take place before the makeup of a new Somalia can be considered.

Previous regional systems under both the post-independence government and the military government were based on clan-dominated settlements that lacked the necessary ingredients for social cohesion, economic viability, and clan diversity. Most Somali clans contest the unfairness inherent in the use of these regions as a basis for forming new regional governments.

Therefore, a meaningful and practical federal system can only take root if it is not based on clan-ism. It would require a limited number of regions with clearly defined boundaries, viable economies, strong clan diversity, homegrown (not diaspora-based) leadership, access to the sea and water sources, and true grassroots participation among all inhabitants.

If Somalia is to become a politically stable, economically viable, and peaceful nation that can compete with other African countries, clan-dominated federal states must be made a thing of the past.

Thankfully, it seems that there is widespread acknowledgement inside Somalia about the importance of cultural diversity as a national strength. However they choose to structure their government, Somalis must recognize that the future of Somalia depends on their harmonious coexistence and the equitable distribution of natural resources among all Somali citizens.

The state of the Somali union can be strengthened by the collective understanding that a divided and clan-based Somalia will not usher in a new era of peace and tranquility so badly needed in the region. On the contrary, what Somalis desperately need is a new vision that acknowledges everyone’s value, anchored in a solid social compact and genuine reconciliation.