A new book refutes a central myth about the Vietnam War.

A new report uses facts, figures, and faces to make the case for the revival of the Poor People’s Campaign.

Film: The Draft and the Vietnam Generation

Inspiring stories of people who faced being drafted to fight in a war they opposed and how their defiance changed American politics forever, followed by a discussion with filmmaker Beth Sanders.

The Heroes Behind Obama’s Historic Announcement in Laos

The United States will devote $90 million to finding and disposing of 50-year-old unexploded bombs.

Muhammad Ali Understood the Racist Roots of War and Militarism

And he called them out fearlessly.

Is Putin Really as Foolish as We Are?

Putin’s attempt at “shock and awe” in Syria has all the hallmarks of failed U.S. interventions of the past

Vietnam: The Power of Protest

Telling the Truth. Learning the Lessons at the 50th Anniversary of the Vietnam Peace Movement.

Film: The Trials of Muhammad Ali

Join IPS and Community Cinema [DC] for this preview that explores the extraordinary and complex life of the legendary athlete outside the boxing ring, including a Q&A with David Zirin, sports writer for The Nation and author of  Game Over: How Politics Has Turned the Sports World Upside Down.

In part, the Vietnam War was perceived as a message that the U.S. would not be intimidated by a Chinese nuclear-weapons program. 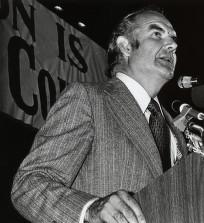 A Tribute to George McGovern

He has lived a life nearly as large as his heart.

A recently discovered U.S. army report puts lie to the Pentagon’s denials that it exposed soldiers and civilians to Agent Orange on Okinawa.

A Bomb-Free Future for Laos

When it comes to Vietnam and China, the frenemy of our frenemy is an even closer frenemy.

Genetically modified crops are part of a war against Mother Nature.