If AT&T is allowed to acquire T-Mobile, just two wireless giants will control nearly 80 percent of the nation’s cellphone market. 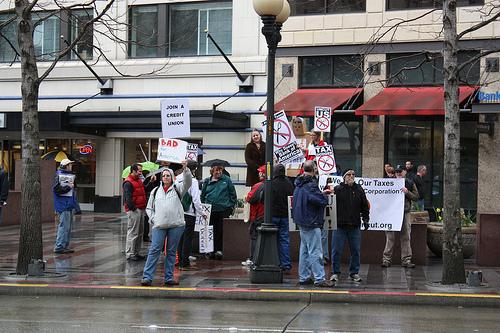 Where Will We Find the Money?

Schools, housing, hospitals, roads aren’t a match for loopholes for the rich.

Global corporations are gaming our tax system and paying nothing, zero, zip toward government services they enjoy.

Energy moguls think that environmentalists would be happy to see our nation freeze in the dark.

Corporations and the Arab Net Crackdown

Western countries have condemned Internet restrictions in the Arab world. But Western corporations have provided the tools of repression.

Most of us pay more in taxes than many U.S. corporations, and corporate tax avoidance has increased dramatically in the last 50 years.

Instead of “blackshirts,” we’ve got stuffed suits.

The middle-class became extinct after that merger between corporate America and Communist China.

Congress is about to slaughter social spending but leave a lot of sacred cows alone.

Walmart has plans to establish four stores in DC by 2012. Notorious for threatening small businesses, causing the loss of more jobs, and bringing lower wage standards for all workers to communities, concerned District of Columbia citizens and social justice advocates are coming together to spread the news and resist the potentially disastrous implications for the District of Columbia.