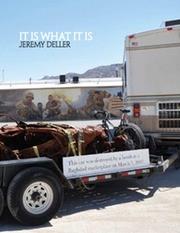 Review: It Is What It Is

A British artist starts a conversation in America about a war in Iraq.

For three weeks in 2009, Jeremy Deller and a handful of collaborators hauled a burned-up hunk of steel across the United States. This rusted carcass – a car destroyed in a Baghdad marketplace bombing in 2007 – transformed a vast swath of Middle America into a space for discussion about a war in which Washington long ago lost interest. It Is What It Is showcases transcripts of the group’s discussions, photographs from the obscure or eccentric locales where they occurred, and any number of other mementos from the group’s travels.

Wherever the group set up, locals gathered to engage in impromptu discussions with Jonathan Harvey, an Iraq war veteran and former psychological operations officer, and Esam Pasha, an Iraqi artist and translator living as a refugee in the United States. One army vet who spoke to the group in Houston justified the war by urging Pasha to understand that Americans were simply angry after 9/11. In Tempe, a former contractor detailed the abuse and subjugation of foreign employees by U.S. firms working in Iraq. Discussions ranged from the inane to the fascinating.

Deller insists that the traveling exhibit is nonpolitical, or at least not some kind of itinerant anti-war showcase. Actual anti-war activists like Peace Action’s Raed Jarrar, who visited the first FPIF-cosponsored stop in Washington, excoriated the crew for calling the public’s attention to Iraqi-on-Iraqi violence as opposed to the unjustness of the war itself. An anonymous vandal in Kansas City, who chalked “The Bush/Cheney Legacy” on the street behind the car, also found fault with this particular limitation. In the hands of the right curator, after all, the shell of a car from a suicide bombing that killed 35 people could be turned into a poignant symbol of a failed imperial occupation.

But Deller and curator Nato Thompson, whose road journal concludes the book, remind us that conversation itself is a political undertaking. Whatever character the exhibit assumes – whether anti-war, militarist, or hopelessly muddled – derives completely from the conversations it provokes. It Is What It Is thus toes a tenuous line between relational aesthetics with a political theme and actual political activism. Its ultimate end is conversation, not provocation.

One of the first photographs in the book is a two-page spread of the al-Mutanabbi Street book market in Baghdad before the suicide bombing destroyed it. In the accompanying interview, Esam Pasha recalls the market as a space where artists, intellectuals, and merchants shared tea, books, and opinions. Subsequent photographs from the group’s road trip – a murky motel swimming pool in Nashville, a dusty old jukebox in Memphis, indifferent joggers in Dallas – give the sense that Deller and his friends have rekindled a small spark of the Baghdad book market’s relational virtue in any number of obscure American localities. The relative polish of the public’s opinions, the analytical depth of their observations – these are of less importance than the undertaking of conversation itself.

In the shadow of the mangled car, a stark reminder of a conflict that for Iraqis remains very real, Deller offers ordinary Americans the chance to come to terms with a war they have increasingly struggled to forget.