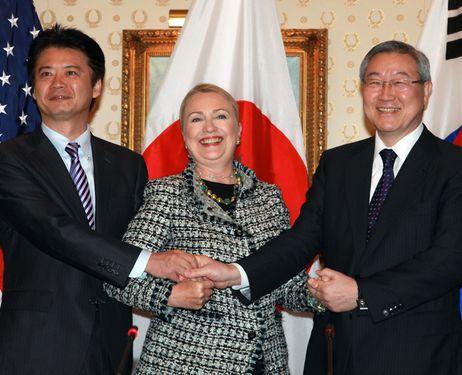 A new CSIS report is indicative of the American foreign policy establishment's contempt for Japan. 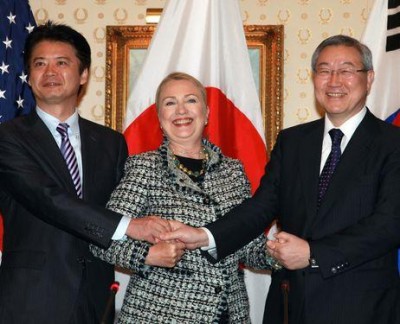 This article is part of a weekly FPIF series on the Obama administration’s “Pacific Pivot,” which examines the implications of the U.S. military buildup in the Asia-Pacific—both for regional politics and for the so-called “host” communities. You can read Joseph Gerson’s introduction to the series here.

Richard Armitage is at it again.

George W. Bush’s deputy secretary of state has made a career of telling Japan what to do. When then-Prime Minister Junichiro Koizumi had second thoughts about joining the “coalition of the willing” in Iraq, Armitage told an official, “Don’t try to back off.” Earlier, he had advised Japan (in Gavan McCormack’s paraphrase) to “pull its head out of the sand and make sure the Rising Sun flag was visible in the Afghanistan war.”

Now, in a report co-written with Joseph Nye for the conservative-leaning Center for Strategic and International Studies (CSIS), Armitage states: “Japan should confront the historical issues that continue to complicate relations with ROK [South Korea].” The report was released on August 15, in the midst of an upsurge in tensions between Japan and its neighbors. Koreans, Chinese, and other Asians suffered horribly from Japanese imperialism, and despite repeated apologies and some payment of reparations, many in those countries feel that Japan has not adequately redressed its wrongs. Millions of Japanese agree.

But the cause of redress is only undermined by the current spate of tit-for-tat visits to islands of disputed sovereignty, rabid demonstrations, and demands for apology that predictably drive up nationalistic feeling on all sides.

A Pattern of Paternalism

It goes without saying that overcoming these differences would be in the interests of Japan, South Korea, and China. It would help them to peacefully cooperate and devote resources to problems in the here and now. Most of all, it would serve justice. But why, exactly, are Armitage and Nye pressing for Japan to do this?

In order to answer this question, we must examine some of their other recommendations for Japan. These include the “cautious resumption of nuclear power,” a unilateral decision by Japan to send minesweepers to the Persian Gulf “at the first rhetorical sign or indication of Iran’s intention to close the Strait of Hormuz,” increased collaboration with the United States on surveillance in the South China Sea, and an expansion of “the scope of [Japan’s] responsibilities to include the defense of Japan and defense with the United States in regional contingencies.”

The last item requires explanation: it is a reference to collective self-defense (the use of force to defend an ally), which is proscribed under the war-renouncing Article 9 of the Japanese Constitution. This prohibition is one of the few ways that Article 9 is still honored, making it another “historical issue” that “complicates” matters for American power projection. The report notes that the U.S. military’s assistance to Japan in the wake of the March 11, 2011 earthquake and tsunami set a useful precedent for interoperability with Japan’s Self-Defense Forces. It was clear from the start that the cynically named Operation Tomodachi (“Friend”) was intended to make Japanese citizens more amenable to the presence of U.S. troops.

The paternalism of these recommendations fits a pattern going back to Douglas MacArthur, who famously characterized Japan as a 12-year old boy. These days, Americans employ more tactful language and affirm their respect for public opinion when issuing orders to Japan—at least in public. But does it matter to the authors, for example, that poll after poll shows support for eliminating nuclear power? Probably not. Michael Green, another former Bush official who participated in the creation of the document, scorned resistance to nuclear power in Japan as NIMBYism – just weeks before the Fukushima disaster. Of course, the authors insist that all this is for Japan’s own good, but curiously, in their formulation, Japan rarely has interests at odds with the United States. Imagine the howls arising from Congress if a group of Japanese ex-officials started issuing prescriptions to the United States—advising it, for example, on how to interpret its own constitution and employ its armed forces.

However, reports like this find a receptive audience in the Japanese halls of power. The conservative establishment there has long chafed under Article 9 restrictions. Despite much talk of “soft power,” the overwhelming tendency is to entrust security to military might—at first, under the American “nuclear umbrella,” but increasingly to Japanese and American forces acting in concert (under overall American command, of course).

All this fits into McCormack’s depiction of Japan as an American client state, with “servility on one side and condescension and contempt on the other.” When Prime Minister Yukio Hatoyama made efforts toward an East Asian Community and to reduce the burden of American military bases on Okinawa, he was punished with a stone wall of resistance from the Obama administration and resigned after less than nine months in office. Ever since, prime ministers have clung more tightly to the American embrace. Though there are growing calls to reconsider the alliance in view of an increasingly multipolar world, the CSIS report aims to extend Japan’s role under U.S. hegemony. Given longstanding personal and institutional links between the two countries’ national security establishments, it may succeed.

And therein lies a contradiction. As Philip Seaton observes in his book Japan’s Contested War Memories, the United States has long served as an enabler for Japanese politicians who nullify previous apologies for wartime behavior with provocative words and deeds:

Overall, American policy, particularly since 9/11, has been unambiguously helpful to Japanese conservatives. The American government supports the Japanese government on compensation (even concerning claims by US citizens), is in favour of renouncing the pacifist element of Japan’s constitution, does not condemn worship at Yasukuni Shrine where all the war criminals executed by the Allies … are enshrined, and is actively pushing for the remilitarization of Japan. Some American neo-cons have even suggested that Japan should arm itself with nuclear weapons to confront the North Korean threat, a proposal that horrified many Japanese. Given that all of these are (or would be) viewed as a “failure to address the past” if pursued unilaterally by the Japanese government, the complicity of Japan’s most important ally in that “failure to address the past” becomes stark.

The Armitage-Nye report clearly persists in this complicity. Increasing the offensive capability and scope of the Japanese military is the last thing likely to assuage bitter memories of the Imperial Japanese Army’s behavior during the Fifteen-Year War of 1931 to 1945. And to encourage a reliance on force is to suggest that such wounds can be safely left to fester.

Thus, the primary objectives of this report conflict with its call for overcoming historical problems. If the Armitage crowd had any genuine interest in righting the wrongs of past wars, they would be just as eager to see Chinese grievances addressed as those of Koreans (not to mention the innumerable victims of American atrocities). Instead, they invoke the bogeyman of China’s rise as their main rationale for Japan-U.S. military integration. To be sure, China’s aggressive assertion of its territorial claims plays into their hands; “alliance managers” in Washington and Tokyo eagerly exploit friction with China (and North Korea) to overcome resistance as they introduce more and more weapons systems into Japan. And so one recommendation the report does not make—in this 75th anniversary of the Nanjing Massacre—is that Japan more fully face up to the outrages it perpetrated in China.

No, the CSIS experts are interested in contestation over history only to the extent that it interferes with American strategic goals: Japan and Korea must stop squabbling so they can be more effectively used by the United States to counter China. When South Korea, in the face of public opposition centering on historical disputes, scuttled an intelligence-sharing agreement with Japan, it was very bad news in the Pentagon. Sure enough, the report urges “quick movement to conclude” the pact.

In a presentation of the report, Armitage speaks admiringly of Japan’s “national brand” (51:30 in the video), seemingly unaware of the major role Article 9 played in building it. He and Nye write that Japan can ignore their report unless it wishes to be a “tier-one nation”—meaning one, like the United States, with “significant economic weight, capable military forces, global vision, and demonstrated leadership on international concerns.” That is, if you want to be an impotent little nothing of a country, go right ahead. Armitage, though, hopes for “a Japan in which young Japanese can dream, not just exist” (59:05). In order to do more than “just exist,” apparently, your country must be constantly at war. It must be, in other words, an empire, or at least the favored vassal of one.

Just because the Armitage-Nye report’s call for Japan to rectify its historical differences with South Korea is purely self-interested and contradictory is no reason for intransigence. The problem is that no solution framed in terms of cleaving to the United States, or reluctantly joining together with South Korea against China, will last. In the midst of the current crisis, the way forward requires recognizing the common interests of all the people of East Asia—no matter how much they diverge from those of the American foreign policy elite.