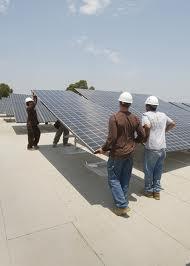 Labor and Environmental Leaders Move Beyond Differences to a Common Vision

Our nation can realize a future that is equitable and ecologically balanced, but to do so we must build a movement supported by a broad base of citizens committed to transformative change. We will work together towards these ends.

During our many decades of work in the labor and environmental movements, there have been many battles that led to tensions between our communities. The Keystone Pipeline is only the most recent example. To help overcome these challenges, we recently convened two dozen leaders of labor, environmental, and other organizations for a frank conversation about the difficult times faced by ordinary workers and the dire environmental prospects we all face. We were motivated by a deep conviction that our communities could unite behind a common vision of a new economy that is good for working families and for the planet. We know that a top priority of most people is decent, dignified jobs that advance a truly sustainable economy.

And, at the end of our conversation, we were heartened by the unity we found in this diverse group of leaders behind a common vision. And we hoped that by developing the following joint statement, we could help build broader consensus around this vision and steps towards achieving it.

Labor-Environment Solidarity
for a More Just and Sustainable Economy

This statement grows out of a discussion at Georgetown University on February 15, 2013 among leaders and organizers from the labor, environmental, and democracy movements sponsored by the Labor Network for Sustainability (LNS) and Georgetown’s Kalmanovitz Initiative for Labor and the Working Poor (KI).

For decades, there have been initiatives by labor and environmental leaders at local, state, and national levels to forge closer ties between these two communities, from Environmentalists for Full Employment in the 1970s to the Blue-Green Alliance and the Labor Network for Sustainability today.

Despite these efforts, there have been times of tension and conflict. The debate over the Keystone XL pipeline today is only the most recent of such moments. Many in the environmental movement have made stopping the pipeline a top priority for 2013, and many but not all in organized labor are backing the pipeline as a source of good jobs. There have been a number of instances in recent years where leaders in each of these communities have failed to acknowledge the concerns of the other.

Nonetheless, many leaders and organizers within these movements recognize that they share many values and are prepared to help define a common vision and lead a struggle for a more just and sustainable economy. In the short-term, we feel that there are many things that each community can do to advance mutual interests and concerns. Longer term, we feel that articulating a common vision for a new economy is necessary to allow these movements to serve their individual interests, but also to contribute to building a better society.

In a recent dialogue among the signers of this statement, we were struck by a common commitment to build on shared values to strengthen our solidarity by developing a shared vision, identifying obstacles and building a common agenda to move forward together.

We agree on the urgent need to build a more just and sustainable economy. We recognize the need to strengthen the solidarity between our movements to be successful. And, we are confident that an honest dialogue among leaders and activists in our movements is key to developing the shared vision necessary to strengthen our solidarity.

We recognize that the American economy is neither sustainable, nor just. We are on a climate change path that unless radically altered will lead to global warming of seven degrees Fahrenheit or greater. We are also in the most serious employment crisis since the Great Depression, wages have stagnated for over three decades and economic inequality is worse than any time since the 1920s.

We recognize that our shared goals cannot be realized without challenging the undue influence that corporations exercise over our economic system and our political process.

We also recognize the many factors that make it difficult for our movements to act in concert. Some of these affect cooperation in the short term; others are deeper and longer-term differences of perspective. Too often the cultures and organizations of the labor movement are indifferent to the challenges of sustainability. Too often, the environmental movement is inattentive to the injustice of the American economy.

Finally, despite the challenge to unity represented by the KXL pipeline, we recognize there is a larger common purpose to be served through dialogue among leaders and organizers of these movements to define and fight for an economy that works for all, but that also respects the limits of the environment we share.

Among the many labor and environmental organizations engaged in serving these shared values and realizing a common vision, the Labor Network for Sustainability is hosting a dialogue among leaders and organizers to help define an economy that realizes their shared values and to advocate for the policies necessary to serve them.

It is easy to identify important national goals where our alliance must be strong and our collaboration active:

Looking ahead, we will begin in earnest a dialogue on how to realize an America where the true and actual priorities of economic and political life are sustaining people, place, and planet; where social justice and solidarity are prized; and where peace, communities, democracy, and nature all flourish. We believe it is possible to build a new economy and a new politics. Many of the needed answers are already at hand, and others can be found. Our nation can realize a future that is equitable and ecologically balanced, but to do so we must build a movement supported by a broad base of citizens committed to transformative change. We will work together towards these ends.

Bill McKibben and May Boeve
350.org

Organizations listed for identifications purposes only

Joe Uehlein is Founding President and Executive Director of the Labor Network for Sustainability and Voices for a Sustainable Future. He is the former secretary-treasurer of the AFL-CIO’s Industrial Union Department and former director of the AFL-CIO Center for Strategic Campaigns. Joe spent over 30 years doing organizing, bargaining, and strategic campaign work in the labor movement.

Gus Speth helped found the Natural Resources Defense Council in 1970 and the World Resources Institute in 1982. He was chair of President Carter’s Council on Environmental Quality and served for a decade as dean of the Yale School of Forestry & Environmental Studies. He now teaches at the Vermont Law School.