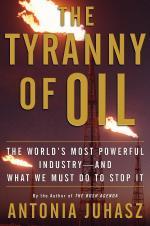 Come hear IPS visiting scholar Antonia Juhasz discuss her new book, The Tyranny of Oil: The World’s Most Powerful Industry–And What We Must Do To Stop It (www.TyrannyofOil.org).
Finally, the inside story on Big Oil.

The hardest-hitting exposé of the oil industry in decades answers today’s most pressing energy questions:

“A worthy successor to ‘The Prize’…A riveting read with a bold blueprint for ending the madness.” – Terry Tamminen, former Secretary of the California Environmental Protection Agency.

“At last, a no-holds-barred book that traces the story of Big Oil from the rise of John D. Rockefeller’s Standard Oil Company to the scandals and obscene profits of today. Juhasz convincingly demonstrates how Standard Oil’s descendants—Exxon, Mobil, and Chevron—have reassembled much of the power once wielded by their progenitor.” – Professor Michael T. Klare, author, Rising Powers, Shrinking Planet: The New Geopolitics of Energy.

In The Tyranny of Oil, Antonia Juhasz pulls back the curtain on Big Oil—uncovering virtually unparalleled global power, influence over elected officials, lax regulatory oversight, the truth behind $150-a-barrel oil, $4.50-a-gallon gasoline, and the highest profit in corporate history. Exposing an industry that thrives on secrecy, Juhasz shows how Big Oil manages to hide its business dealings from policy makers, legislators, and most of all, consumers. She reveals exactly what Big Oil wants and how it plans to get it—through money, influence, and lies. Juhasz then provides a clear set of meaningful and achievable solutions, including the break-up of Big Oil.

The Tyranny of Oil prepares readers for election 2008–allowing them to interpret the constant stream of competing proposals and perplexing news stories about gasoline and oil prices, offshore oil drilling, Big Oil’s role in the larger economy, wars for oil, and much more. It arms with the facts while guiding readers through the industry’s rapacious history–demonstrating how the worst abuses of the robber-baron era are being revisited today.

Drawing on considerable historical research, Juhasz explores the parallels between today’s companies and Standard Oil, the most powerful corporation of the early 20th century, whose stranglehold on the economy and government was broken only by the vision and persistence of activists and like-minded politicians. We are in a similar position today, Juhasz argues, with the 2008 elections offering a unique opportunity for ordinary Americans to come together, reclaim their voices, and shore up our nation’s crumbling democratic foundation.

A tool for meaningful change that blends history, original investigative research and reporting, interviews with key industry insiders, and a unique focus on activism, The Tyranny of Oil is required reading for every concerned global citizen.